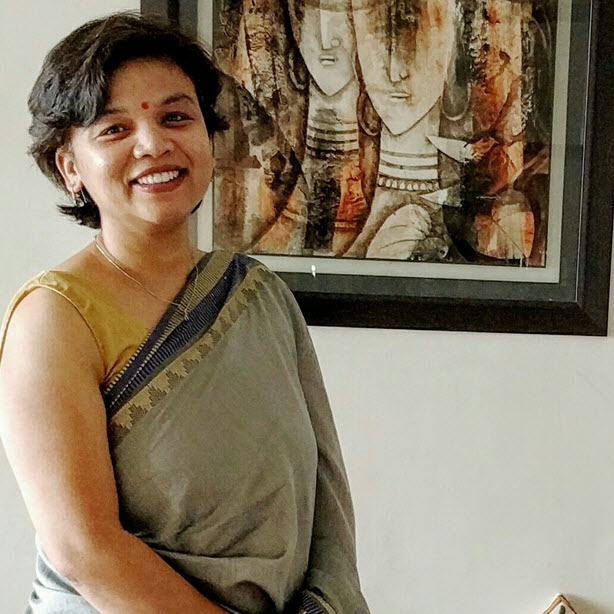 Surekha was born in an army background. Army background meant, moving from one place to another every three years traveling to some of the remotest towns of India, to some of the biggest metropolitan cities like our capital Delhi. And traveling meant, shifting her schools every three years ending up studying in all kind of schools be it public, government or convent. A new school meant to start with new set of friends, new set of teachers, new curriculum and new methods of teaching. Every movement converted the excitement of change and fun into a challenge because she found it difficult to adjust to changing teaching methodology of new teachers.
An observer as a kid, who would learn more from the day to day happenings rather from inanimate books and the knowledge rattled out by teachers, she traversed through K-12 to graduate as an MBA only to find it was not what she was aspiring for.
Her formal education had not been able to satisfy her soul. There was always a missing link. After working for a few years in the corporate structure, the dissatisfaction became bigger between the learning’s of school and real life.
It is at this juncture of life she felt the need to find out what is it that differentiates the education aboard from ours and moved on to pursue MS in Non Profit Leadership University of Pennsylvania, an Ivy League school in USA.
The hands on training environment on why a particular problem needs to solved and the ways and means to solve it, satisfied her childhood quest of what’s the real objective of education and how if used in a particular way can solve major problems of the world. As a part of the program she did her research on the HR systems of the World Food Program, which later became a monograph called “History of Present’ Human Resource Crisis at World Food Programme”.
UPenn made her acutely aware of the crass fallacies prevalent in our education systems which were simply playing with the lives of upcoming generations leaving them to fend for themselves after wasting their twelve fertile years in close classrooms.
Surekha started an organization named ELNA -Experiential Learning through Nature Based Activities.
It was mainly based on the hypothesis that a social problems could be effectively exploited via live social projects to bring out the underlying academic concepts covered under various subjects like EVS, Math, Social Studies, Languages, Arts etc.
The above idea was executed under the flagship program of ELNA known as Dastak which targeted more than thirty schools pan India.
While conducting Dastak in rural and urban schools, emerged the idea that core of learning was attached to thinking skills which could be developed by integrating art and drama with academics.
Having conducted Dastak in multiple cities successfully for three consecutive years she arrived at the conclusion that effective learning could be made possible only through effective lesson planning and its execution. This gave birth to eShikshaChaupal, a Teachers Touchstone Pvt Ltd software
eShikshaChaupal is a unique technology driven interface facilitating educators to transform classroom learning into lasting experience.
It is an free online platform for the teaching community giving the members an opportunity to extend and enhance the spectrum of their teaching learning activities by connecting with the other members and sharing their experiences via a content library available to all the stake holders which include parents and students. It’s completely free to access content library. In next three months EShikshaChaupal will be rolling out the beta version of its paid software a monitoring and evaluation tool and are looking at selling it to minimum 15 schools before the year closes.
In this whole journey, Surekha was supported unconditionally by her family, but it was her mother Savitri Waldia who has been her anchored in her entrepreneurial journey. It is her mother who she Iooks up to when she is in a fix. Seeing her dedication and her passion, soon her friends Shubhangi Mishra and Sonia Mathur joined her in developing eShikshaChuapal. She believes her team is her biggest strength because without them eShikshaChaupal would not have been born.
#WECanIndia Program by Dhriiti-The Courage Within and Cherie Blair Foundation for Women has helped Surekha crystallize the market of EShikshaChaupal. To quote her” These five months have been just beautiful. We Can happened to us at that time when my team and I were struggling with just the development of the software. We Can has been a catalysts which we needed desperately to structure our own thoughts, our finances, our reach, promotion and all those expertise which an entrepreneur needs to roll out the product at the right time. A mentor helps you to structure the ideas and also guides you to make use of all the opportunities that come along the way. That’s what you are to us, a very strong pillar of support which we need right now at the fag end of the pdt development and its launch.”