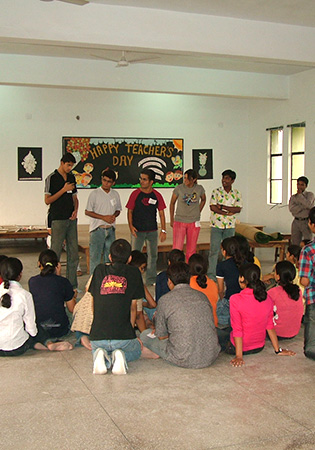 Udaan was a collaborative pilot project between Dhriiti–The Courage Within, Generation Enterprise and The World Bank. The project aimed to train low-income youths between the ages of eighteen and thirty, in the field of entrepreneurship, and further assist them in setting up their own enterprises or expanding their already existing enterprises. At the final stage of the programme, the youths were expected to present their business plans to a panel of judges who select the most promising ones to receive interest-free start-up/expansion loans.

The Udaan workshops commenced in August 2013 and were spread over six weeks, with a total of sixteen sessions. Eighteen youths were accepted into the programme after a screening process which included a basic mathematics test, a psychometric and personality test gauging entrepreneurial inclination, and an interview. The training covered subjects such as opportunity identification, communication, marketing research, operations, and basic financial skills. Following the six-week long training was the ‘test phase’, during which the fellows were given up to Rs. 2000 each to test a small-scale version of their business idea, or an entirely different idea that would be viable given the funds available. The purpose of this was to give the fellows an on-the-ground experience of running a business, therefore ensuring the viability of their idea, providing them with a practical insight into the nitty-gritties. This practical application was also useful in helping to determine which of the fellows should be selected for the start-up/expansion loan. This loan was in the form of assets (for example, computers, furniture, or even rental money).

No. of trainees
Enterprises numbers