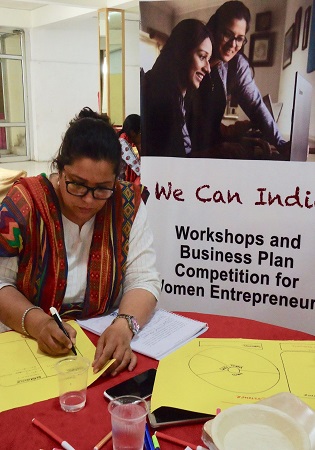 WE Can India, is an enterprise development program launched by Dhriiti in partnership with Cherie Blair Foundation, supported by US Embassy. It is an initiative dedicated to promoting Women Entrepreneurship in Northern India, especially Delhi, Jaipur, Lucknow, Dehradun and Chandigarh. The aim of this program have been to equip these enterprising women with the skills, knowledge and confidence needed to grow their businesses so that they can realise their ambitions, contribute to their economies and act as role models to others in their communities.

Out of which 125 applicants registered themselves to the program and they were provided with their business workshops and training’s during month of February and March in 5 states (as mentioned above).
82 Women Entrepreneurs presented their business plan after the training’s in their business plan competition and 76 of them were selected for mentoring sessions. 76 women entrepreneurs were mentored by 22 mentors who came from a variety of expertise and thematic areas. Business plan competitions were conducted in all 5 participating cities and the 26 finalists for the program were selected. Business advisory sessions were conducted with each finalist and the design of the incubation phase was finalized.
The incubation process has been designed on the basis of the business advisory sessions which were conducted with each individual incubatee.
Rigorous incubation support was provided to the final 26 incubatees.

The final 5 incubatees were selected as winners according to their elevator pitches before the panel and their participation and responsiveness throughout the program. The winners were declared on the finale event of the WE Can India held on 06th October 2017 at the American Centre Delhi.

No. of Applicants
No. of WE Trained
No. of WE Incubated